what is an Apprenticeship?

An apprenticeship is a combination of a job and an approved training programme which gives an individual the skills and experience required for a specific job role. Our apprenticeships can range from a level 2 through to a level 3 and employers can recruit new staff or enrol current staff onto an apprenticeship programme at any time.

Our apprenticeship duration may vary depending on the apprenticeship selected, but it will be a minimum of 12-15 months. Employing an apprentice is like employing any other member of staff but they must be contracted for at least 30 hours a week and have a contract that covers the duration of their apprenticeship programme.

To gain the knowledge and know how we advise that an apprentice must be given 20% of their contracted time to complete off-the-job training.

So that this can be completed effectively we will discuss and develop and off the job hours as part of Get Actives bespoke programme design and consultation.

We offer a wide range of qualifications, training programmes and modules that meet industry requirements and expectations. Meaning that everyone who completes a Get Active apprenticeship will have up to date knowledge, skills and behaviours that are needed to complete their job role.

Get Active works with a range of different industry organisations such as NCFE,1st4Sport, Elite Training Skills to deliver to ensure high quality learning, teaching and coaching for all Sport and Leisure professionals.

We strive to deliver the very best standard of training to our learner.

Courses we deliver are:

Level 3 Supporting the delivery of physical Education and School Sport

We pride ourselves on the calibre of our team; they receive three surprise assessments every term and are trained once a month to ensure that they maintain high standards of teaching.

All schools and parents seeking an outside partner will want to be assured that they are getting the best possible service. Our team are dedicated professionals and you will get to know them well through using our provisions.

Each member of our team is trained to exceptionally high standards and have years of experience in delivering high quality coaching.

We also ensure that our coaches are made aware of changes and developments within the sports coaching industry.

Each term, we require a completed quality control form to ensure that our clients are satisfied with our performance. We also have internal Ofsted assessments for our staff to ensure they keep the high-quality delivery for every school. All curricular have a high level of education in a sport or teaching field’s with experience in providing high level PE lessons as PE Teachers, PE Coordinators or PLTS meeting all strands of the National Curriculum.

By employing over 50 highly qualified coaches, we can guarantee minimal disruption to sessions in the event of absent members of staff.

Every school is provided with an information pack that includes all risk assessments, CRB details, child protection policy, club registers, spare club letters and a plastic wallet to store any returned forms and payments.

As a company we pride ourselves on making a difference. Whether this is to a child’s life and wellbeing, or to helping our schools to improve fundraising and providing a more engaging service.

From September 2017 the Government have announced an increase from £160 million per year to £320 to help schools support healthier, more active lifestyles. This funding will enable primary schools to make further improvements to the quality and breadth of PE and sport they offer. 1,600 schools will also receive funding to ensure more children have a nutritious breakfast as a healthy start to their school day.

Funding for secondary schools has also been announced, allowing schools to extend their school day to offer a wider range of activities to pupils including more sport.

In the Summer of 2015 we were awarded a contract through Wokingham Borough Council to supply holiday camps in 5 areas across 3 weeks. Below is a summary, a full report is available on request.

“From the evidence collected in this report and other external evidence, the continuation of offering an outreach play-scheme in addition to the current sport holiday provisions over the summer period is essential. It will continue to strengthen bonds being built between vulnerable residents and council services by offering a service which supports them returning/continuing to work, maintaining a healthy emotional wellbeing balance within their households and ensuring the vulnerable children in our community are taking part in a safe, enriching project which supports not just their physical development but also their educational development over the long summer period.

In conclusion, the extension of the summer play-schemes is strongly recommended and the benefits have been overwhelmingly demonstrated through data and anecdotal evidence gathered this summer”

We are heavily involved with local community projects such as:

Sport Relief, where with 5 other schools have helped to raise over £10,000 for the charity.

Thames Valley Youth FC’s main Sponsor for their annual 6-a-side tournament for 1,600 children, we donated £1000 to the charity whilst helping them raise further funds over the weekend.

Thames Valley Police football tournament and a Fun Day for the Scouts are just a few examples of upcoming events.

We work alongside The Beehive Foundation to provide additional support for children with disabilities to attend our holiday camps. For more information visit www.beehivefoundation.co.uk.

In recent years, our team have taken part in Colour Runs in aid of cancer research and oftern attend fetes and fundraisers for schools. 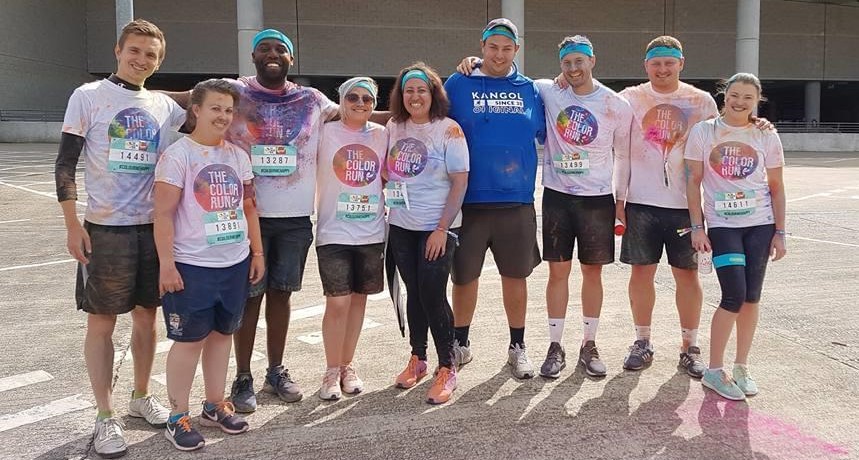 Get Active Sports is proud to support Great Ormond Street Hospital Children’s Charity. To find out more about the charity or to make a donation, please visit www.gosh.org .